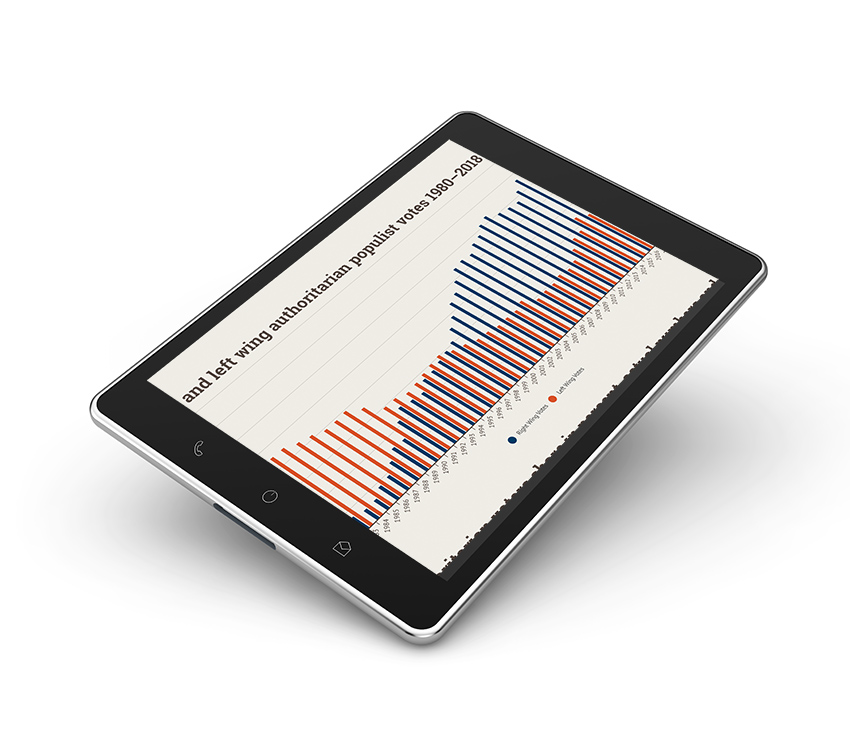 The data is available in Google Sheets-format (which is easily converted to Excel). If you want the data in a different format, please contact us.

The data of the Authoritarian Populism Index is the property of Timbro/Foundation for Free Enterprise. Anyone is free to access, use, modify (but not alter) and share the data. However, any use of the data must attribute Timbro in proximity to the charts and data.

This report is an effort to present a comprehensive outlook on the growth of populism in European politics and includes all European consolidated democracies: thirty-three countries including the twenty-eight members of EU plus Iceland, Norway, Switzerland, Serbia and Montenegro.

Non-democracies are excluded, since there is no real meaning in comparing countries where democratic rights systematically are being limited or violated to consolidated democracies. The same goes for semi-authoritarian countries with regular, but only somewhat, free elections: Macedonia, Albania, Bosnia and Herzegovina and Moldova. Here, the supply of alternatives to authoritarian populism is too scarce for any meaningful comparison.

The survey begins with 1980, since the overwhelming majority of today’s populist parties emerged during the 1980s and 1990s. Countries are included as soon as they are categorised as a “free” society by Freedom House, an American, governmental-funded NGO. Hence, most post-communist countries enter the survey in 1990, Serbia in 2000 and Croatia in 2001.

To make a selection among parties presupposes qualitative judgments with respect to elements that are in constant flux. A further challenge is that parties will often be labelled in stark contrast to their self-image. To state the obvious: very few parties call themselves populist and even fewer brag about their authoritarian streak. It is also, given the scope of the material, not possible to scrutinize each and every party.

Since the aim of the categorisation is to reflect deeply held ideological views of the party, the index relies heavily on secondary sources. To the extent that it has been possible, it follows typical and existing categorizations. Thus, a number of different sources have been used: scholarly literature on the European party system focusing in general on populist parties, as well as particular parties; ideological labels from internet sources such as parties-and-elections.eu and Wikipedia, and the expert study Chapel Hill Expert Survey (CHES), a quantitative summary of where parties belong on the left-to-right spectrum, combined with additional dimensions that serve to identify right-wing populists (but not left-wing populists) using, for instance, views on minority rights, immigration and multiculturalism.

In general, it is not as difficult to categorize political parties as one might expect. Despite some disagreement on labels, there is a rather wide consensus among scholars on where parties fit in—when in doubt, I have tried to judge the very core of a party’s ideology using both secondary and primary sources (such as official party platforms).

A further difficulty is that many parties are in flux. This is especially true for a number of parties previously described as right-wing extremists, which during the last decade have moved away from extremism. To what degree they have actually succeeded is a question where independent commentators seldom find common ground—Front National and Sverigedemokraterna are typical examples. Austrian FPÖ is included in the study starting 1986, when Jörg Haider was appointed chairman and made anti-immigration a central part of the party platform. Hungarian Fidesz is included from 2002, when the formerly liberal party tipped over into the category of authoritarian populist parties.

Political parties typically aim at one or more of three general goals: office, vote and influence. Even though these goals are logically compatible – increased voter support leads to influence and a more likely path to political positions – parties often have to prioritize between them. TAP studies to what extent populist parties have succeeded in reaching two of these goals: votes and office. Influence on policy is beyond the scope of this index.

Election results have been used to measure the demand for authoritarian populism. In total, 267 parties with at least 0.1 percent of the votes in any election in any of the thirty-three countries since 1980 are included in each respective category. A European mean value based on the previous election in each country is provided in order to give an easy-to-read overview of year-to-year changes. Thus, the Swedish election of 2014 provides the basis for the Swedish average also in 2015, 2016, and 2017. In other words, the index answers the question of how many voters picked an authoritarian populist party at the turn of the year of the last election. Thus, the result will not depend on whether a certain country had an election in a given year, nor on the number of countries having an election in a given year.

Two different indicators have been used to measure weight. First, the absolute number of seats in the parliament. The index shows how many seats each party has held each year in each respective category. Obviously, this measure includes only those parties that have entered the parliament. Parties such as Front National and United Kingdom Independence Party have had relatively strong performances measured in share of total votes, but as a consequence of the election systems in France and Great Britain this has been only marginally reflected in parliamentary presence. The second indicator to measure weight is the role the party has in parliament. Four categories are used: a party may be part of the government, it may have a formal or informal role as parliamentary support for the government, it may be an opposition party or, finally, it may be an opposition party that is excluded from influence by formal or informal agreement among the other parties (such as the cordon sanitaire in Belgium against Vlaams Blok and Vlaams Belang or the December Agreement in Sweden against the Sweden Democrats).

In addition to compiling election results and parliament seats (a total of 153 parties have at any time won at least one seat), I have classified parties as “left” or “right”, and “authoritarian” or “extreme.” Left-right depends first and foremost on the classification provided by the parties themselves; when this has been problematic to apply I have used the most prevalent labels in secondary literature; in some especially difficult cases the label has been decided by the party’s choice of partner. These cases, however, have been few enough to not affect the aggregated result.

The division between “authoritarian” or “extreme” depends on the specific view on the concept of democracy. Only explicitly anti-democratic parties have been categorised as anti-democratic. Parties embracing nazism, fascism, communism, trotskyism and maoism have been regarded extreme. Parties classified as authoritarian are anti-liberal, but still democratic.